Apple’s FaceTime Is Coming to Android and Windows

Update Required To play the media you will need to either update your browser to a recent version or update your Flash plugin.
By Bryan Lynn
09 June 2021


One of the iPhone's most popular features is FaceTime, the live video service often used to connect family members and friends.

Currently, FaceTime can only be used by people using Macs, iPhones or other devices running Apple's iOS operating system. But Apple announced this week that is about to change.

In the near future, FaceTime will be available for Android device users, as well as for computer users on the Windows operating system. Apple announced the news during its yearly Developers Conference.

The change will come with the release of Apple's latest iOS 15 version. Apple says iOS 15 will first be launched in beta testing next month and will become available to all users in the autumn.

How does it work?

Since the service will remain an Apple-only product, FaceTime calls will have to be started by someone using a Mac or iOS device.

An Apple user can create a special internet link in the FaceTime app. This web link can then be shared with Android device users or people using Windows-based PCs. Links can be sent out by email, text message, messenger apps or social media.

The non-Apple users can then use the link to join the call through their device's internet browser. When used in this way, the FaceTime service works similarly to the widely-used video conferencing tool Zoom.

This new ability to create links also makes it easier for all FaceTime users to set specific call times and invite multiple people to join meetings ahead of time. 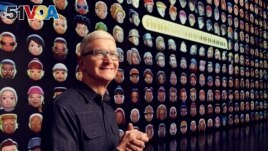 Apple says that all FaceTime communication -- even on the internet -- is encrypted "end-to-end." This kind of encryption is designed to protect messages and other content from being seen or saved by third parties when it is passed between device users.

The FaceTime changes come as video conferencing services saw a huge rise in popularity during the coronavirus pandemic. More people have turned to the services to stay connected while working from home and taking part in online learning.

Apple also announced other changes to the FaceTime service.

One new feature is called "spatial audio," which the company says makes voices during a call sound like they are coming from where the person is positioned on the screen. New microphone settings are designed to separate a user's voice from other noise.

Another feature is called SharePlay, which permits screen sharing and real-time interaction between people during FaceTime calls.

For example, device users can listen to music or watch television shows or movies together through FaceTime. The system is designed to keep everyone's playback in sync as they watch.

Bryan Lynn wrote this story for VOA Learning English, based on reports from Apple and Reuters. Hai Do was the editor.

We want to hear from you. Will you try the FaceTime service if you get the chance? Write to us in the Comments section, and visit 51VOA.COM.

feature – n. a typical quality or important part of something

app – n. a computer application or program used for a specific purpose

browser – n. a computer system that permits you to look at pages on the internet

encrypt – v. to change (information) from one form to another especially to hide its meaning

screen – n. a flat area on an electronic device where images can be seen

in sync – phr. a state in which two things move or happen together at the same time and speed

stream – v. to play a show or movie over the internet