Update Required To play the media you will need to either update your browser to a recent version or update your Flash plugin.
By Jonathan Evans
06 June 2021


Australian scientists are leading an international project to build an extremely powerful ground-based telescope. The scientists say the machine will provide a deeper and clearer look into space than the Hubble Space Telescope.

The telescope's short name is MAVIS. That stands for Multi-conjugate-adaptive-optics Assisted Visible Imager and Spectrograph.

It is designed to correct a problem common to Earth based telescopes: image blurring caused by atmospheric conditions. 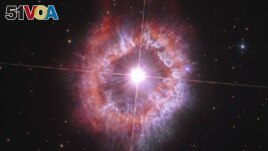 FILE - At the center of this 2021 Hubble image, processed by Judy Schmidt, sits AG Carinae, a supergiant star located about 20,000 light-years away in the southern constellation Carina. (Credit: NASA, ESA, STScI)

Scientists in Australia say the new technology will help them explore how the first stars formed 13 billion years ago. The telescope will also examine changes in the weather on planets and moons in our solar system.

Images produced by MAVIS are expected to be three times clearer than the Hubble Space Telescope. Launched in 1990, Hubble orbits Earth from about 550 kilometers away, well outside the planet's atmosphere.

Richard McDermid of Macquarie University in Sydney says the new telescope will change the way we explore space.

He said the telescope will permit scientists "to push into a new frontier of the furthest and faintest things we can see."

The new view will include the universe's earliest galaxies. This also means an exploration of the past, McDermid explained, "because when we look far away in astronomy we are also looking far back in time because it takes time for the light to reach us."

The telescope will be placed in Chile and run by the European Southern Observatory, a research organization based in Germany. It is expected to take seven years to build and cost $44 million.

blur – v. to make (something) unclear or difficult to see or remember

frontier – n. the limits of knowledge in a particular field