Update Required To play the media you will need to either update your browser to a recent version or update your Flash plugin.
By Dan Novak
29 May 2021


When Florida doctor Thomas Newman died of COVID-19, he left his family with a large collection of sports cards worth some $20 million. One is a Babe Ruth card that could set a new world record.

Sports cards were made in the U.S. in the 19th and 20th centuries. They were included in packages of gum and children collected them. While cards are still made now, it is the old ones that are worth a lot of money.

Newman started his collection about 40 years ago. His family says he was driven by the love of collecting, not money. He built his collection traveling around the United States at conventions and kept his cards in a locked container at his Tampa home.

Nancy Newman was his wife. "He loved his paper babies," she said. "He got such joy out of it."

Newman died in January at age 73. He kept the collection of more than 1,000 old and modern baseball, football and hockey trading cards mostly private outside of his close family and friends.

It will be shared at an online auction at California-based auction house Memory Lane from June 21 to July 10.

Stewart Newman is his son. "It is cool for his legacy that he put 40 years into collecting and he is getting the recognition that was probably overdue," he said.

The most valuable card in the collection is a 1933 Babe Ruth card. Babe Ruth was a star baseball player for the New York Yankees during the 1920s and 1930s. He is widely considered to be the best player in history. Experts say the card could break the $5.2 million world record price for any single sports card.

The Babe Ruth card is rated Mint 9. Cards are rated on a 1 to 10 scale, so a 9 is almost perfect. It is the only Babe Ruth card of its kind that is known to exist. And it comes to auction at a time when prices for sports trading cards have gone way up.

Newman's son said he bought the Babe Ruth card around 15 or 20 years ago for far less than its current worth. He refused several requests to sell it. 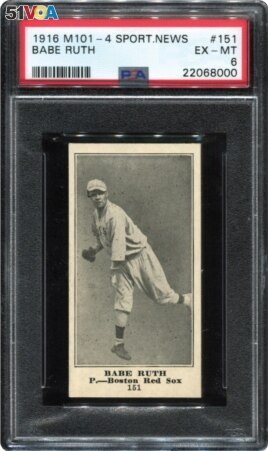 A 1916 Sporting News Babe Ruth rookie card from the collection of Dr. Thomas Newman is seen in an undated photo ahead of an online auction by Memory Lane Auctions. Courtesy of Memory Lane, Inc/Handout via REUTERS

Other valuable cards in Newman's collection include a 1916 Babe Ruth rookie card, and a near-perfect 1952 Mickey Mantle rookie card that could sell for $1 million.

A rookie card is a player's first card created when he becomes a professional and is often considered valuable.

JP Cohen is the president of Memory Lane Auctions. He said: "There are some amazing one-of-a-kind pieces that we, as a company who have been doing this over 20 years, have never seen before."

Newman began collecting as a boy. But his mother threw out his cards when he left for college.

He started collecting again in the 1980s, visiting card collector conventions around the country, often with his son.

"I remember it was hard getting my dad away so I could even just have some lunch or something," said Stewart Newman.

Thomas Newman and his family had a general idea about the value of his collection. But card prices have greatly increased over the past few years and especially during the pandemic.

"He would want it to be an investment for the family's future," Nancy Newman said. "I am sure he is looking down and is very happy with what's happening with the collection."

gum – n. a type of soft candy that you chew on but do not swallow

convention – n. a large meeting of people who come to a place for usually several days to talk about their shared work or other interests or to make decisions as a group

auction – n. a public sale at which things are sold to the people who offer to pay the most

legacy – n. something that happened in the past or that comes from someone in the past

overdue – adj. used to say that something should have happened or been done before now

mint – adj. something in perfect condition, just as if it were new.

rookie – n. a first-year player in a professional sport