Update Required To play the media you will need to either update your browser to a recent version or update your Flash plugin.
By Gregory Stachel
24 July 2021


In Serbia's capital, people are going out again after over a year of restrictions aimed at stopping the spread of the new coronavirus.

However, the loud music and other noise that comes with it is becoming a problem for people living in Belgrade.

Coffee shops, bars, and people who want to have fun are celebrating a summer increase in business and activities.

Nemanja Dragic is a 36-year-old engineer living in the city. He said he cannot open his door without very loud noise entering his apartment since restrictions eased. He used his savings to add additions to the apartment to make it quieter. 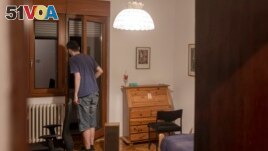 In this photo taken on Friday, July 2, 2021, Nemanja Dragic, 36,opens his door as noise from a local bar fills his apartment in Belgrade, Serbia. Serbia's capital is alive with nightlife again after over a year of pandemic restrictions with bars and other nightlife places opening again. (AP Photo/Marko Drobnjakovic)

Dragic's apartment overlooks a street in downtown Belgrade that is a popular place for activities and nightlife. He said the partying makes it impossible to keep his windows open during much of the summer.

"The noise is such that some neighbors just leave the city or the street or everything," said Dragic.

People who live in the city's business areas have complained for years about the noise that comes from bars and other nightlife places. Some citizen' associations have turned to the European Court of Human Rights in Strasbourg, France, because of the inaction of officials. They brought a case arguing that they have been faced with torture and their rights to family life and privacy have been violated.

Lawyer Marina Mijatovic said she took the issue to court in Strasbourg after Serbian officials ignored a local court ruling that said they did not do enough to limit the noise. She said the European court has yet to decide if it will accept the case.

She said, "We expect the (European) court to confirm the violation of rights and instruct Serbia to take measures to reduce the noise to the levels acceptable for normal life."

City officials did not answer requests to speak with The Associated Press. After promises to address the complaints, Belgrade officials have prepared new noise protection rules that would give more power to a community policing division.

Misa Relic heads the Association of Night Bars and Clubs. He said he knows about the dispute with those who live in some Belgrade neighborhoods. But he warned against quick actions after the pandemic that could hurt what he described as Belgrade's tourist experience.

Relic said, "I am always for an agreement between two sides who understand each other's position and are ready for a fair compromise."

The problem is not new. With covid restrictions easing, nightlife, parties and music events have increased in Belgrade in late June and early July. Partying crowds have raised concerns over possible virus outbreaks as few events request proof of vaccination or negative tests.

Ana Davico works for the Belgrade Noise Abatement Society. She said the local government should follow the example of other major European cities by provided financial support for sound blocking equipment in night clubs.

Davico said noise limits are not enforced and in the 10 years since her group has formed, the situation in Belgrade and Serbia has gotten worse.

Davico said citizens' groups have collected thousands of complaints sent to police, videos, and noise level recordings to support their European court case. The noise is much higher than the legally permitted limits. And only rarely do bars and clubs use sound blocking equipment although it is required by law.

Dragic said the noise problem on his street has hurt home and land prices, making it hard for people to sell if they want to leave the area. He said although bars in central residential areas are supposed to stay open until midnight, the noise they produce before closing time is insupportable.

"What other people take for granted, that they can rest or sleep whenever they want," he said, depends on the bars and people who go to those places. He said he does want to be the one who controls what they play or how long they stay open. He just does not want to hear noise in his apartment.

Jovana Gec reported this story for The Associated Press. Gregory Stachel adapted it for VOA Learning English. Mario Ritter, Jr. was the editor.

bar –n. a building or room where alcoholic drinks

apartment –n. a usually rented room or set of rooms that is part of a building and is used as a place to live

complain –v. to say or write that you are unhappy, sick, uncomfortable, angry or that you do not like something

instruct –v. to give (someone) an order or command

club –n. a business that provides entertainment (such as music, dancing, or a show) and that usually serves food and alcohol

tourist –n. a person who travels to a place for pleasure

take for granted – v. phrase to fail to properly notice or appreciate (someone or something that is helpful or important to you)

rest –n. a period of time in which you relax, sleep, or do nothing after you have been active or doing work