Update Required To play the media you will need to either update your browser to a recent version or update your Flash plugin.
By Jonathan Evans
31 May 2021


China is looking to the ocean to help reduce the cost of cooling data centers that use powerful computers and servers. The country also seeks to reduce the use of traditional energy sources.

The southern island of Hainan has started work on the world's first undersea commercial data center. A Hainan government website said the project is expected to be complete in five years.

Data centers store and process internet data and use large amounts of energy to cool their computer networks. Power costs represent up to 70 percent of operation costs at a data center in China. That information comes from the environmental organization Greenpeace. 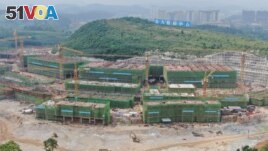 FILE - Huawei Technology Co's new data center is seen under construction in China's Guizhou province May 14, 2019. China is looking to the ocean to help reduce the cost of cooling data centers that use powerful computers and servers. (REUTERS)

The sea technology company Highlander is working with the local government to build the data center. The company said internet service provider Beijing Sinnet Technology will operate the data center in the future.

Highlander added that both a final design of the center and a study of an area off the coast are completed.

Some experts say an undersea data center would reduce cooling costs by making use of dependably low ocean temperatures. But others are concerned about investment returns and the dependability of undersea services.

Yang Zhiyong is a technology expert at CCID Consulting, a state-supported information technology company. He said that while power use might be lower than land-based data centers, "investment at the beginning could be massive."

No investment value was given in the Hainan statement.

It was also unclear who would be financing the project.

In 2018, Microsoft lowered a non-commercial data center the size of a truck about 35 meters into the sea off Britain. The small data center was brought back to land last year, and Microsoft declared the experiment a success.

The Hainan center is designed to contain about 100 data cabinets, each holding several server racks. Small to medium-sized data centers on land usually house up to 3,000 server racks.

Yang said, "I'm afraid internet clients would probably not come to it first, as their major concern is the safety and stability of the data infrastructure."

Lusha Zhang and Ryan Woo reported on this story for the Reuters news service. Jonathan Evans adapted this story for Learning English. Caty Weaver was the editor.

client – n. a person who pays a professional person or organization for services

infrastructure – n. the basic equipment and structures such as roads and bridges that are needed for a country, region, or organization to function properly

rack – n. a frame or stand for storing or displaying things

stability – n. the quality or state of something that is not easily changed or likely to change