Update Required To play the media you will need to either update your browser to a recent version or update your Flash plugin.
By Bryan Lynn
01 June 2021


China's government has raised the child limit for couples from two to three as the country experiences lower birth rates.

For many years, China enforced a one-child policy as a way to control the population. But that policy was replaced in 2016 with a two-child limit. That change was aimed at raising the number of births as the country faced a fast aging population.

But birth rates have further decreased in recent years as the cost of raising children in Chinese cities remains high.

The latest measure to permit three children per family is meant "to actively deal with the aging population," the official Xinhua News Agency reported. The decision came during a ruling Communist Party meeting led by President Xi Jinping, it said.

The policy includes what the government calls "supportive measures" to make it easier for families to have more children. The measures include plans to lower educational costs for families and increase tax and housing support. The government also said it would seek to educate young people "on marriage and love." 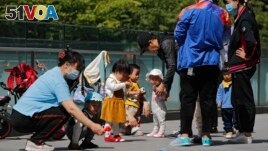 Residents bring their children to play in a compound near a commercial office building in Beijing on May 10, 2021. (AP Photo/Andy Wong)

Recent data showed that China's fertility rate -- the average number of births per mother -- was 1.3 in 2020. That rate – which is similar to aging nations like Japan and Italy – is well short of the 2.1 needed to replace the population.

Yifei Li is a sociologist at New York University Shanghai. She told Reuters that most families did not hold back on having children in recent years because of the government's two-child policy. Instead, she said they held off because of "the incredibly high costs of raising children in today's China."

Zhang Xinyu is a 30-year-old mother of one from Zhengzhou in northeastern China. She said another problem was that women carried most of the responsibility for raising children.

She added, "I don't want to have a second child. And a third is even more impossible."

Economists say that China, along with Thailand and some other Asian economies, faces concerns that it could grow old before it gets wealthy.

The Chinese population of 1.4 billion was already expected to reach a high later this decade before starting to drop. But recent government data suggested that is happening faster than expected. Experts say this adds to pressures on underfinanced retirement and health systems and cuts the number of future workers available to support a growing retiree group.

The share of China's working-age people 15 to 59 fell to 63.3 percent last year from 70 percent a decade earlier. The group aged 65 and older grew to 13.5 percent from nearly 9 percent. The country's reported 12 million births last year was down nearly one-fifth from 2019.

Chinese researchers and the Labor Ministry say the share of working-age people might fall to half the population by 2050. That increases the "dependency ratio," the number of retirees who depend on each worker to pay into retirement programs and to pay taxes for health and other public services.

Party leaders at the meeting also agreed on the need to start delaying retirement ages for citizens, Xinhua reported, without providing details. The government has been debating changes in the current retirement ages of 60 for men, 55 for professional female workers and 50 for blue-collar females.

The Associated Press and Reuters reported on this story. Bryan Lynn adapted the reports for VOA Learning English. Hai Do was the editor.