Update Required To play the media you will need to either update your browser to a recent version or update your Flash plugin.
By Bryan Lynn
02 June 2021

The plans were confirmed to state television by Yang Liwei, a chief designer for China's manned space program. Yang was the country's first astronaut to launch into orbit in 2003.

Three astronauts are to complete a three-month mission on the new space station, called Tianhe. It is the third and largest space station China has built. Its main module was launched into orbit April 29.

The astronauts will be carried to space aboard the country's Shenzhou 12 spacecraft. It will launch from China's Jiuquan base in the northwest. 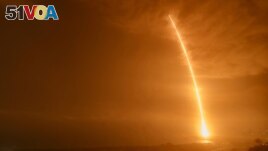 The Long March-7 Y3 rocket carrying the automated cargo resupply spacecraft Tianzhou-2 as one of the missions to complete China's space station, takes off from Wenchang Space Launch Center in Hainan province, China May 29, 2021.

Yang did not provide the identities of the astronauts or give a flight date in his comments to China Central Television. But he said the astronauts were expected to practice spacewalks, complete repairs and carry out some scientific operations.

When asked whether any women were in the crew, Yang said none would be joining the upcoming mission. "But missions after that all will have them," he added.

China does not take part in activities aboard the International Space Station, largely because of U.S. objections. U.S. officials are suspicious of the Chinese space program's secrecy and its connections to the country's military.

The Chinese space agency plans a total of 11 launches through the end of next year. The missions will transport the remaining modules for the 70-ton space station and transport more supplies and crew.

China has sent 11 astronauts -- including two women -- into space, beginning with Yang's flight in October 2003. The first female astronaut was Liu Yang in 2012.

All of China's astronauts to date have been pilots from the ruling Communist Party's military branch, the People's Liberation Army.

Yang said the astronauts will practice making spacewalks with two people outside the station at one time. China's first spacewalk was made in 2008 by astronaut Zhai Zhigang outside the Shenzhou 7 spacecraft.

Last month, China made history by successfully landing a spacecraft on Mars. The Tianwen-1 spacecraft carried a robotic explorer, called Zhurong. The explorer, or rover, is expected to measure atmospheric conditions and magnetic forces during its search for signs of ancient life on the Red Planet.

The Associated Press reported on this story. Bryan Lynn adapted the report for VOA Learning English. Hai Do was the editor.

mission – adj. a flight by an aircraft or spacecraft to perform a specific task

module – n. a part of an object that can operate alone, especially a part of a spacecraft