City, District, County, Town: What Are the Differences?

Update Required To play the media you will need to either update your browser to a recent version or update your Flash plugin.
By John Russell
21 May 2021

Can you explain the words 'province, city, district, county and town? What are the differences? 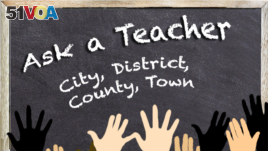 Your question centers on how a country divides itself into different levels of governance. The difference is much like the layers of an onion – underneath a large layer there are smaller layers beneath.

There are differences between how these levels of governance look between countries, so let's only explore the United States.

In the United States, we use the term "state" instead of the term "province."

A state is a part of a country that can make its own laws about some things. But it is still controlled by the federal government.

The United States has 50 states - Texas, New York, California, and so on.

Each of these states generally has many cities, districts, counties, and towns.

A city is a place where people live that is larger than a town. Famous cities in the U.S. include New York City, Dallas, Los Angeles, Chicago.

Let's talk through an example.

Colorado is a state. Cities in Colorado include Denver, with an estimated population around 730,000, and Colorado Springs, with about 480,000 people.

Towns in Colorado include Silverton, with an estimated population of 600, and Nucla, with around 700.

A county is an area of a state that is larger than a city and has its own government to deal with local issues. For example, El Paso County, in Colorado, has the city of Colorado Springs as well as other communities inside of it.

A district is an area of a country, city, or town that a government establishes for official business.

In the U.S., there are school districts, voting districts, and so on.

Colorado's 5th Congressional District, for example, is a voting district that includes Colorado Springs and other communities.

It might help to think about different levels of governance in your country. Then you can compare your country to the United States. Maps can help, as well as the news!

If you have a question for our staff of teachers, send it by email to learningenglish@voanews.com.

And that's Ask a Teacher!

John Russell wrote this lesson for VOA Learning English. Hai Do was the editor.

layer – n. an amount of something that is spread over an area

onion – n. a round vegetable that is usually white, yellow, or red and has a strong smell and taste