Update Required To play the media you will need to either update your browser to a recent version or update your Flash plugin.
By Dan Friedell
24 July 2021


Four different kinds of carp fish from Asia that now live in lakes and rivers in the United States are called "Asian carp."

But it is not an official, scientific name.

The fish are considered an invasive species. This means their population cannot be controlled. The carp eat food and take up resources other native fish need to live.

The carp were first brought to the southern United States about 50 years ago. They were placed in some small bodies of water as a way to control unwanted plant life. But now they have spread into large rivers and lakes across the country. 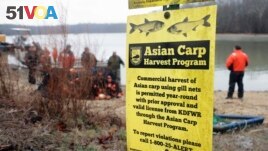 In this February 5, 2020, photo, wildlife officials take part in a roundup of Asian carp in Smith Bay on Kentucky Lake near Golden Pond, Kentucky.

Many states in the central part of the U.S. have programs in place to kill the carp. In fact, at one time, there was a sign at the airport in Minneapolis, Minnesota that read: "Kill Asian Carp."

No one knows exactly who came up with the name Asian carp. But after a number of hate crimes against Asian-Americans in recent years, people are working to change the name others use for the fish.

An Asian-American politician in Minnesota, Foung Hawj, heard about the sign. He started working to change the name to "invasive carp."

Government agencies in Minnesota that work with fish and wildlife agreed to change the name that they use for the fish.

Charlie Wooley is director of the Great Lakes office for the U.S. Fish and Wildlife Service. He said, "We wanted to move away from any terms that cast Asian culture and people in a negative light."

A North American organization working to control the population of the fish, known as Asian Carp Regional Coordinating Committee, also agreed that it would change the name it uses in August.

Other wildlife organizations are also trying to change the names they use for some animals and insects.

The Entomological Society of America studies insects. It is no longer calling one moth species and another ant species "gypsies." Gypsy is the name for an ethnic group that started in South Asia. Some consider the term gypsy to be insulting.

While the carp are no longer being called "Asian," it is still unknown whether they will be called "invasive carp" in the future.

A number of interest groups are working to rename the fish so that Americans may want to eat it. While people eat carp in many places in the world, it is not popular in the U.S.

People in the seafood business are working to come up with a name that sounds good.

In Illinois, the state is making advertisements that call carp "The Perfect Catch" and "delicious."

The new name, however, has not been made public.

Name changes for fish have worked in the past.

Even if the carp get new names at restaurants or food stores, scientists will probably come up with names of their own. Many fish have names that come from Latin. Fish scientists say they never called the carp "Asian" or "invasive."

One scientist, Song Qian, thinks the four different fish should get different names. Qian is a professor at the University of Toledo.

He says calling the fish from Asia "bad" or "invasive" makes them sound harmful. However, in their native countries, the fish are considered good to eat and represent good luck in China.

"That's why there's talk of cultural insensitivity," he said.

Foung Hawj, the Minnesota politician, was born in Laos and came to the U.S. after the war in Vietnam.

He said he is glad the "Asian carp" name is going away. The discussion about the fish, he noted, "is a small thing, but it can resonate greatly."

John Flesher wrote this story for The Associated Press. Dan Friedell adapted it for Learning English. Ashley Thompson was the editor.

What do you think would be a good name for the fish? Tell us in the Comments Section and visit 51VOA.COM.

cast – v. to send something forward

negative light– adj. making something known in a bad or unfair way

insensitive – adj. showing that you do not know or care about the feelings of other people

resonate – v. to have particular meaning or importance for someone : to affect or appeal to someone in a personal or emotional way