Update Required To play the media you will need to either update your browser to a recent version or update your Flash plugin.
By John Russell
23 September 2021


Imagine you are discussing your day. Perhaps you want to describe your morning – what you did, how you felt, and so on.

Morning is a time of action. You wake up, you drink something, you plan your day. 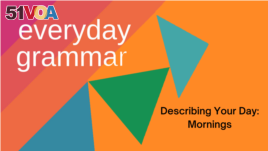 Phrasal verbs are groups of words that have a meaning that differs from what the individual words suggest. Phrasal verbs have a verb and another short word or words.

Let's consider an example: wake up.

In the example, you heard the past tense form of wake up, woke up.

Waking up is the first action of every person's day. And usually, after you wake up, you do another action that involves a phrasal verb: get up.

Get up means to rise or to cause another person to rise after sleeping.

Many parents have told their children "Get up! It's time for school!"

Get up is close in meaning to yet another phrasal verb: get out of as in "get out of bed."

After waking up and getting up or getting out of bed, you might consider how you are feeling. At this point, we move from phrasal verbs to linking verbs.

Linking verbs are verbs that connect the subject to a word or words that give more information about the subject. They are different from other kinds of verbs because they don't really describe actions. Instead, they describe feelings and states of being.

One of the most common linking verbs is the verb be.
A person that just woke up might say "I am tired" or "I am sleepy."

In both of these cases, the verb be connects the subject I to an adjective such as tired or sleepy. These are qualities or states of being.

But be is not the only linking verb you might use to describe how you feel in the morning. You can also use the verb feel. A person might say "I feel sleepy" or "I feel energetic."

After considering how you feel, you might take action. The verb make is important for describing actions in the morning.

Make often appears with a noun phrase - a group of words that acts like a noun in a sentence.

"After I wake up, I always make my bed."

In the example, the noun phrase my bed comes after the verb make.

But people don't just make their beds in the mornings. They make coffee, they make tea or they make breakfast.

In today's report, you learned about how different verb forms or structures help describe the morning and the morning's activities. Try to use some of what you have learned today when you are speaking English in class or with friends.

Pay careful attention to movies or shows - you might hear some of the verbs we just talked about today. You might learn about some other verb structures too.

We hope that the next time you wake up, you will say to yourself: "I am excited to learn more about English grammar!"

be supposed to – idiom to be expected to do something

energetic – adj. having or showing a lot of energy

excited -- adj. very enthusiastic and eager about something