Update Required To play the media you will need to either update your browser to a recent version or update your Flash plugin.
By Anna Matteo
09 June 2021


Some 3,000 tern eggs were abandoned at a Southern California nesting island after a drone crashed and scared off the birds, a newspaper reported in June.

In May, two drones were flown illegally over the Bolsa Chica Ecological Reserve in Huntington Beach, California. One of them went down in the wetlands, The Orange County Register, a local newspaper, reported.

Fearing an attack from a predator, several thousand terns abandoned their ground-based nests, reported the state's Department of Fish and Wildlife.

Usually during June, the white birds would be watching their eggs as they begin to hatch. But now, the sand is filled with eggshells. 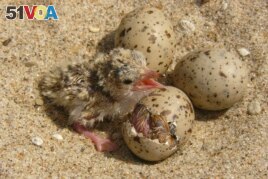 Melissa Loebl is the manager of the nature reserve. She called it one of the largest abandonment of eggs ever at the coastal area. The reserve is about 160 km north of San Diego, California.

That has led to an increase in human activity, including flying drones, walking dogs, and riding bicycles. All these activities are not permitted.

Loebl said that there has been a great increase in dogs, particularly those permitted to run free. She explained that this is especially bad during the nesting season.

"The dogs chase the birds, and the birds abandon their nests," she said.

Another problem is the development of multimillion-dollar homes near the reserve, said Fish and Wildlife guardian Nick Molsberry. While most residents respect the rules of the reserve, he said, some do not.

Some residents, suggested Molsberry, feel entitled and feel they "should be able to use the land as they like." Officials, however, are increasing enforcement and fining people who break the rules.

The reserve is the largest saltwater marsh between Monterey Bay just south of San Francisco and the Tijuana River Estuary in Mexico. Some 800 species of plants and animals live at or migrate to Bolsa Chica.

Staff writers for the Associated Press reported this story. Anna Matteo adapted it for VOA Learning English. Susan Shand was the editor.

drone – n. an un-crewed aircraft or ship guided by remote control or onboard computers

wetland – n. an area of land (such as a marsh or swamp) that is covered with shallow water

resident – n. someone who lives in a particular place

entitled – adj. having a right to certain benefits or privileges

marsh – n. an area of soft, wet land that has many grasses and other plants