Update Required To play the media you will need to either update your browser to a recent version or update your Flash plugin.
By John Russell
25 July 2021


A female elephant makes a rare appearance on the edge of a thick forest in southwest China's Yunnan Province. She eats and cleans up in the water as a large crowd gathers.

Qin is a protection officer at Wild Elephant Valley in Yunnan's Xishuangbanna area. It is near China's border with Laos and Myanmar. 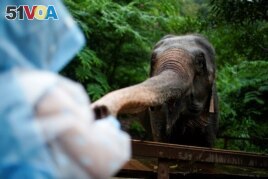 How Xishuangbanna protects its elephants and natural environment will be important for China's efforts to change its relationship with nature.

Xishuangbanna is a center for biodiversity. But large building projects and increased farming have reduced the elephants' feeding area and their roaming paths.

One building project is the Jinghong Hydropower Plant.

The dam and reservoir have made the Mekong River impossible for elephants to cross, said Zhou Jinfeng.

He is Secretary-General of the China Biodiversity Conservation and Green Development Foundation or CBCGDF, a non-government environmental group.

State power company Huaneng, which built the plant, did not answer requests from Reuters for comment.

People living in Xishuangbanna told Reuters that elephant sightings have decreased since 2007, when the plant was completed.

Zhou Hongbing lives on a farm close to the dam.

"They used to roam here when my parents set up home," he said about the elephants. "Since the hydropower plant was built they haven't been able to cross the river."

Qin from Wild Elephant Valley said it was "hard to say" what effect the hydropower center has had on elephant movements. But, he said it must have been a consideration when the plant was built.

Qin noted that tea farms have cut into some parts of the elephant protection area. Large amounts of rubber planting throughout the area have also changed feeding and roaming habits.

Experts also point to Xishuangbanna's efforts to replant forests that have reduced the grassland where elephants eat.

China's National Forestry and Grassland Commission is responsible for habitat protection. It also did not answer Reuters' requests for comment.

But state news agency Xinhua said that "preparatory work" has begun to establish a national park in Yunnan. The goal is to improve conditions for the elephants.

Experts say that should have been done a long time ago.

Zhou of CBCGDF said any new national park would have to connect all the existing elephant habitats. It would need to give elephants the room to move and the ability to find enough food.

"If the numbers double again within the next 50 years, we need to have plenty of room in Yunnan," he said.

David Stanway reported on this story for Reuters. John Russell adapted it for Learning English. Mario Ritter, Jr. was the editor.

biodiversity – n. the existence of many different kinds of plants and animals in an environment

reservoir – n. a usually artificial lake that is used to store a large supply of water for use in people's homes, in businesses, etc.

roam – v . to go to different places without having a particular purpose or plan

habitat – n. the place or type of place where a plant or animal naturally or normally lives or grows

plenty –n. the state of having enough of something