Update Required To play the media you will need to either update your browser to a recent version or update your Flash plugin.
By Bryan Lynn
04 June 2021


Facebook said Friday it will continue its suspension of former President Donald Trump for at least two years. The social media company also announced changes to a policy that permitted politicians to post some kinds of content that violates its rules.

The changes were announced in a statement by Nick Clegg, Facebook's vice president of global affairs and communications.

The company suspended Trump's Facebook and Instagram accounts in January. Facebook said it took the action because Trump posted content that risked fueling further violence after the January 6 storming of the U.S. Capitol by his supporters.

Clegg said the decision to extend the suspension until at least January 2023 was made because Facebook believes Trump's actions represented "a severe violation" of its rules. And, his actions had earned "the highest penalty available under new enforcement" measures.

The latest decision came after a Facebook advisory board last month criticized the company for making Trump's suspension "indefinite." The board said the open-ended ban was wrong because it was ordered without clear standards. 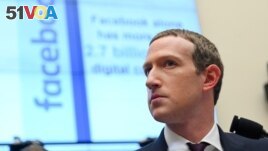 In a press release, Trump called Facebook's decision "an insult" to Americans who voted for him in the 2020 presidential election. He said the social media service "shouldn't be allowed to get away with this censoring and silencing ... our country can't take this abuse anymore!" Trump said in the release.

Facebook also announced it will strengthen penalties for "public figures" during times of civil unrest and violence. It said those who violate its policies during such times can be restricted from posting for periods between one month and two years.

Public figures who continue to violate policies after being placed under restrictions will be subject to "heightened penalties," including possible permanent removal, the company said.

Facebook also said it would end its "newsworthiness exemption" policy for politicians. The policy permitted content posted by politicians to avoid going through the company's usual third-party fact-checking program. The program is designed to prevent false information, hate speech and other abusive material from appearing on Facebook.

But Facebook said it put the exemption in place because it saw the speech of political leaders as "newsworthy" and in the public interest, even if the content was offensive or highly disputed.

Facebook said Friday that it will still use the exemption to some posts it considers to be in the public interest even if they violate Facebook rules. However, it will no longer treat material posted by politicians differently from content posted by any other user.

In addition, Facebook said it will now make public cases where it does use the exemption. And, the company said it would start publishing details about its system of "strikes" that is issued to accounts for breaking content rules.

Bryan Lynn wrote this story for VOA Learning English, based on reports from The Associated Press, Reuters and Facebook. Hai Do was the editor.

penalty – n. a punishment for doing something that is against a law or rule

indefinite – adj. with no fixed time, size, end or limit

standard – n. a level of quality that is considered acceptable

assess – v. to make a judgement about the value, quality, size, etc. of something

censor – v. to examine documents or media materials and remove parts that are offensive or not permitted by rules

exempt – adj. given special permission not to have to do something