Google Fined $268 Million in France, Agrees to Changes in Advertising

Update Required To play the media you will need to either update your browser to a recent version or update your Flash plugin.
By Bryan Lynn
07 June 2021


Google has agreed to make changes to its online advertising business in a settlement with the French government.

The agreement, announced Monday, requires Google to pay a $268 million fine for abusing its "dominant position" in the online advertising market. 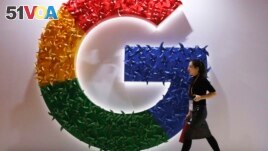 In this Monday, Nov. 5, 2018 file photo, a woman walks past the logo for Google at the China International Import Expo in Shanghai. (AP Photo/Ng Han Guan, File)

The French Competition Authority said it had found that Google's ad management system for large publishers favored its own online ad marketplace, AdX, over competitors. AdX is a tool used by publishers to sell advertising space. French officials said AdX is built to work more effectively with the service Google Ad Manager than with other ad placement providers.

Google did not dispute the findings and said it had agreed to make changes to its advertising business as part of the settlement.

The company promised to improve the way its Ad Manager services work with competing online advertising systems. It also said it had agreed to make it easier for publishers to use its data and tools. A company statement said Google "will be testing and developing these changes over the coming months" before launching them widely.

The head of the French Competition Authority, Isabelle de Silva, said it was "the first decision in the world" to center on Google's complex ad serving system. The system uses algorithms to decide which ads users are shown.

Google's ad systems had hurt competition in the online marketplace and permitted the company "not only to maintain, but also to increase its dominant position," de Silva said.

The settlement "will make it possible to re-establish a level playing field for all players, and the ability for publishers to make the most of their advertising space," de Silva added.

French Finance Minister Bruno Le Maire welcomed the decision. He said Google systems that help its own ad technologies hurt press groups that depend heavily on online adverting income. "These are serious practices and they have been rightly sanctioned," Le Maire said.

Major technology companies have been facing increasing attention in Europe and other places over their business methods. Germany also launched an investigation of Google.

The European Union has accused Apple of blocking competition in online music sales. It also has accused Amazon of using information from independent businesses to unfairly compete against them with its own products. In addition to that, the EU is looking into Google's advertising systems and methods.

The Associated Press, Reuters and Agence France-Presse reported on this story. Bryan Lynn adapted the reports for VOA Learning English. Mario Ritter, Jr. was the editor.

dominant – adj. the main or most important part of something

management – n. the way in which something is carried out and controlled

algorithm – n. a set of steps that are followed in order to solve a mathematical problem or to complete a computer process

maintain – v. to make a situation or activity continue in the same way

complaint – n. a statement that something is wrong or unacceptable

sanction – n. a punishment for not obeying a rule or law

license – v. to give someone officials permission to do or have something