Update Required To play the media you will need to either update your browser to a recent version or update your Flash plugin.
By Bryan Lynn
22 May 2021


A large Chinese mining company says illegal operations at its gold mine in Colombia are seriously harming its production.

Zijin Mining Group paid $1 billion for the Buritica gold mine in 2019. The mine is near the Colombian community of Buritica in the Andes Mountains.

Zijin knew there were security risks in the area when it bought the mine. But local government officials and police tell Reuters that illegal mining activities there have increased.

They say there are now thousands of illegal miners working in difficult, sometimes-deadly conditions around the Buritica mine. Officials say the illegal miners work in many tunnels and at more than 150 secret processing centers in the area. 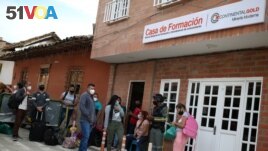 People line up in front of the formation house of the Zijin mine in Buritica, Colombia, on April 19, 2021. REUTERS/Luisa Gonzalez

Police say the tunnels are controlled by the Clan del Golfo criminal group, known locally as "The Ten." The name comes from the 10 percent that members take from the illegal miners' production. The group buys the remaining illegal production. It pays miners by permitting them to keep some gold or giving them money or liquid mercury.

In addition to harming legal mining operations, the illegal activities present security threats to the nearby community. Local leaders fear violence related to criminal activity and mercury poisoning of natural water supplies. Mercury is used by the miners to separate gold from dirt.

James Wang is the head of Zijin-Continental Gold, the company operating the Buritica mine. He told Reuters that production is being "seriously affected" by the presence of illegal miners.

The company's losses in the first three months of the year were 20 percent of total production, Wang said. As a result, the company has lowered its production target for the year by about 16 percent.

"They occupy high-grade areas, that's the problem," Wang said. He added that the company never meets its output target of at least 500 kilograms each month because of illegal operations.

The problems facing Zijin in Buritica are the latest test of Chinese miners' ability to deal with security concerns in Latin America. Mining companies in Latin America have struggled with illegal miners, community tensions and crime for a long time.

China especially depends on South America for a large amount of its copper and zinc imports. State-run Chinese companies have also taken ownership of mines in Peru and Ecuador.

Zijin's production losses in Buritica could reduce industry interest in Colombia. The country is seeking new investments in development of its supplies of gold, copper and other minerals.

Wang said it has become "really, really challenging" dealing with such issues in Colombia. He added that establishing good relations with local governments can help solve the problems, but "it will take time."

Wang said that while the government had offered "very strong support," more action was needed "to implement law and order." He did not say if that meant an increase in military or police presence was needed, saying it "depends on the situation."

Reuters reported on this story. Bryan Lynn adapted the report for VOA Learning English. Mario Ritter, Jr. was the editor.

implement – n. to put in place