Update Required To play the media you will need to either update your browser to a recent version or update your Flash plugin.
By Dan Novak
24 May 2021


Doctors in India are fighting a fungus that is infecting COVID-19 patients and those who have recovered from the new coronavirus.

The dangerous infection, called mucormycosis, is rare. But doctors say its sudden increase could make India's fight against COVID-19 even more difficult.

India has reported almost 27 million cases of the coronavirus since the pandemic began. Almost half of that number has been recorded in the past two months.

India's vaccination drive has also slowed recently. Many states say they do not have enough vaccines. India is the world's largest vaccine-producing country. But it has fully vaccinated just 3.8 percent of its almost 1.4 billion people.

Experts say new infections in India may finally be slowing. But there are some early signs that mucormycosis, also known as "black fungus," is becoming a serious concern.

Mucormycosis is caused by exposure to the mucor mold, which is found in soil, air and even in the nose of humans. It spreads through the lungs and damages the face. Sometimes, doctors have to remove an eye to prevent the infection from reaching the brain. 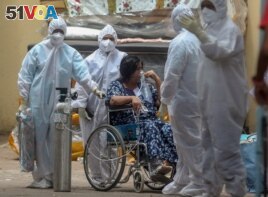 Health workers attend to a patient at the Jumbo COVID-19 hospital in Mumbai, India, Thursday, April 22, 2021. New infections are rising faster in India than any other place in the world.

On Saturday, federal minister Sadananda Gowda said nearly 9,000 cases had been reported in India. The quick rise has led to a shortage of Amphotericin B, the drug used to treat the condition. Local media have said more than 250 have died from infections.

Mucormycosis infections can cause death at a high rate. The fungus was present in India before the pandemic. It is not contagious, but the high number of cases in the last month has surprised and worried doctors.

Ambrish Mithal is a doctor with Max Healthcare, a private group of hospitals in India.

"It is a new challenge and things are looking bleak," he said.

"Earlier I used to come across just a few cases every year but the current infection rate is frightening," Mithal said.

India's large cities have seen signs of improvement in recent days. But the virus has hit the country's rural areas where most Indians live and where health care is limited. Now heath experts are worried that common medications, including steroids, are increasing the infection rate of mucormycosis.

SK Pandey is a medical officer at a hospital in Uttar Pradesh state. He said inexperienced doctors were giving steroids to patients in rural areas without considering all the possibilities.

"This has led to increase in black fungus cases in smaller cities where the patient has not even been hospitalized," he said.

India's Health Ministry on Thursday asked states to follow the spread of the condition and declared it an epidemic. All medical centers must report the cases to a federal network.

Sheikh Saaliq reported this story for the Associated Press. Dan Novak adapted it for VOA Learning English. Mario Ritter, Jr. was the editor.

fungus –n. any of a group of living things, such as mushroom and molds, that behave like plants but do not have flowers or leaves

expose — v. to cause (someone) to experience something or to be influenced or affected by something

mold — n. a soft substance that grows on the surface of damp or rotting things

contagious — n. having a sickness that can be passed to someone else by touching

challenge — n. a difficult task or problem : something that is hard to do

bleak —adj. not hopeful or encouraging

epidemic –n. a situation in which a disease spreads quickly and affects a large number of people