Update Required To play the media you will need to either update your browser to a recent version or update your Flash plugin.
By Dan Friedell
18 May 2021


A top Japanese medical organization representing 6,000 doctors is now calling for the country to cancel this summer's Tokyo Olympics.

The Tokyo Medical Practitioners Association said it is worried that the country's healthcare system cannot deal with an increase of coronavirus infections less than three months from the start of the Games.

In a letter to Japanese Prime Minister Yoshihide Suga last week, the group wrote that Japan should tell "the IOC (International Olympic Committee) that holding the Olympics is difficult and obtain its decision to cancel the Games." The Tokyo Games were already delayed from last year. The event is now planned to run from July 23 to August 8. 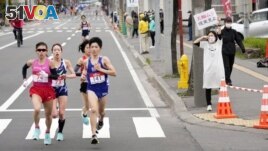 A spectator raises a paper sign reading 'It is impossible to hold the Olympics, face up to reality' along the race route during the half-marathon as part of Hokkaido-Sapporo Marathon Festival 2021.

Compared to many countries, Japan has dealt with the COVID-19 pandemic well. But a slow vaccination program, increase in virus cases, and shortage of hospital beds led the government to extend a state of emergency in Tokyo and other parts of Japan for the third time. Bars, restaurants and public gathering places have been closed for months. The restrictions are set to end May 31.

The Reuters news agency estimates only about 3.5 percent of the Japanese population of 126 million has been vaccinated. More people are now able to get the vaccine, but registration websites are having technical problems.

In the letter, the medical organization warned that if the Olympics led to a rise in deaths, "Japan will bear the maximum responsibility." The group noted that its doctors would also face the difficulty of treating patients affected by heat during the summer.

In addition to the letter from the medical group, hundreds of thousands of Japanese have signed a document that asked the government to cancel the Games. Still, Suga said he believes the Olympics can go ahead safely if people follow the rules to keep COVID-19 under control.

Even with these concerns, over 400 athletes came to Tokyo's Olympic Stadium for an event without fans in early May.

However, some Olympians are worried about holding the Games during a pandemic.

Eric Lamaze is a Canadian gold medalist who competes in horse riding. He said he will not try to make his country's Olympic team this year. Lamaze is worried about his health. He was recently treated for a brain tumor. He said he does not think Tokyo is the best place for him to be this year.

"The Olympics are a celebration of the athletes and I don't think we're going to have a true celebration in Tokyo," he said.

Antoni Slodkowski wrote this story for Reuters. Dan Friedell adapted it for Learning English. Hai Do was the editor.

How will you feel if the Olympics are canceled? Tell us in the Comments Section and visit 51VOA.COM.

obtain –v. to gain or get something

maximum –n. the highest number or amount that is possible or allowed — usually singular

medalist –n. used to describe a top finisher at an event like the Olympics

celebration –n. a party or other special event that you have for an important occasion, holiday, etc.