Update Required To play the media you will need to either update your browser to a recent version or update your Flash plugin.
By Dan Friedell
06 July 2021

Hannah-Jones and her supporters fought hard to get a tenured professorship at UNC. Tenure is a life-time appointment for a professor. The university first denied tenure for Hannah-Jones, saying it was concerned about her ideas and her teaching ability. Black students, Black professors and other professionals questioned the university's opinion and its commitment to free speech and diversity. 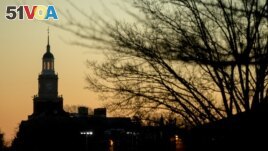 FILE - The Howard University campus at sunrise in Washington, D.C.

Hannah-Jones developed The 1619 Project for The New York Times. The collection of stories looked at the history of the United States starting with the arrival of enslaved people. It centers on the economic and social effects of the free labor provided by the enslaved people.

The idea of examining history in this way is controversial in many states. Some public school teachers in states controlled by Republican leaders are not allowed to teach about the project in their classes.

Last week, after weeks of criticism and days of protests from students, the university finally decided to offer Hannah-Jones a life-long position at its journalism school.

On Tuesday, Hannah-Jones said she could not accept work at the university's journalism school, which is named after Walter Hussman.

Hussman is a wealthy Arkansas newspaper publisher who gave $25 million to UNC. He also campaigned against giving Hannah-Jones tenure.

"I cannot imagine working at ... a school named for a man who lobbied against me," Hannah-Jones wrote.

She added that Hussman "ignored" her years of work and her credentials because he believed The 1619 Project was about "the denigration of White Americans."

She also wrote that she could not work at a university whose leadership "permitted this conduct and has done nothing to disavow it."

Hannah-Jones is not the only well-known Black writer to receive a position at Howard University on Tuesday. Howard also employed Ta-Nehesi Coates. Coates writes about the struggles of Black people in America. His 2015 book Between the World and Me won a National Book Award.

United States Vice-President Kamala Harris attended Howard University in the 1980s. It is one of several historically Black colleges and universities in the U.S. They are schools founded to support the education of Black people at a time when many universities did not accept Black students.

Tom Foreman, Jr. wrote this story for the Associated Press. Dan Friedell adapted it for Learning English. Susan Shand was the editor.

How do you think Hannah-Jones will do working in Washington, D.C.? Tell us in the Comments Section and visit 51VOA.COM.

diversity – n. the state of having people who are different races or who have different cultures in a group or organization

controversial – adj. relating to or causing much discussion, disagreement, or argument : likely to produce controversy

lobby – v. to try to get something you want by talking to the people who make decisions

credential – n. a quality, skill, or experience that makes a person suited to do a job

denigration – n. the act of saying something critical or unfair

conduct – n. the way that something is managed or directed

disavow – v. to say you are not responsible for an action or behavior