Update Required To play the media you will need to either update your browser to a recent version or update your Flash plugin.
By Dan Novak
13 September 2021


North Korea said Monday it successfully tested a long-range cruise missile over the weekend. The tests show how the country is trying to grow its nuclear technology as diplomatic talks with the United States have mostly stopped.

The state-run Korean Central News Agency (KCNA) reported that the missiles hit targets 1,500 kilometers away. State media published photos of an object being launched from a truck and what looked like a missile traveling in the air. Experts say the long-range cruise missile could give North Korea another way to escape its neighbors' missile defenses.

North Korea says it needs nuclear weapons in order to prevent what it claims is hostility from the United States and South Korea. 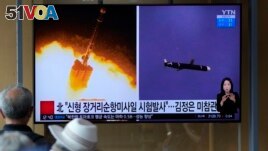 North Korea called its new missiles a "strategic weapon of great significance." Experts say that wording means the new missiles were developed to arm them with nuclear weapons.

"While you could say the missile will be nuclear capable, there is no known North Korean warhead for it yet," said Melissa Hanham. She is with the Stanford Center for International Security and Cooperation.

The cruise missile can be launched as far as 1,500 kilometers. That means it could reach all parts of South Korea and most of Japan.

In a statement, the U.S. military said it knew of the launches and is working closely with its allies and partners.

The international community has tried for many years to get the North to stop its nuclear weapons program through threats of sanctions and the promise of economic help. But U.S.-led diplomatic meetings have greatly slowed since talks broke down in 2019 between North Korean leader Kim Jong Un and then-U.S. President Donald Trump. At that time, the Americans rejected Kim's demand for economic help in exchange for closing an old nuclear center.

There had not been any known test launches since March, as Kim has been working on fighting the coronavirus and trying to improve the economy. Experts have said the economic situation in the North is very poor.

The report of the tests comes before U.S. President Joe Biden's representative for North Korea, Sung Kim, was to meet with South Korean and Japanese diplomats in Tokyo Tuesday. The group was set to discuss nuclear diplomacy with North Korea.

Defense experts say the missile test was a clear message to Washington. But the test may also be a sign that the North is struggling to develop more advanced weapons, said Du Hyeogn Cha. He is with Seoul's Asan Institute for Policy Studies.

At a congress of the ruling Workers' Party in January, Kim promised to improve North Korea's nuclear technology. He listed new equipment he hoped to build, including longer-range intercontinental ballistic missiles, nuclear-powered submarines and spy satellites. North Korea has not carried out an intercontinental missile or nuclear test since 2017.

Japanese Chief Cabinet Secretary Katsunobu Kato said the North Korean missiles present a "serious threat to the peace and safety of Japan and its surrounding areas." He said Japanese leaders were working with the U.S. and South Korea to gather information on North Korea's latest tests.

Kim's powerful sister, Kim Yo-Jong, last month suggested that North Korea was ready to restart weapons testing. She also released a statement strongly criticizing the U.S. and South Korea for continuing their shared military exercises. She called the exercises the "most vivid expression of U.S. hostile policy" towards the North.

Dan Novak adapted this story for VOA Learning English based on reporting by The Associated Press and VOA News. Ashley Thompson was the editor.

cruise missile — n. a large military weapon that flies close to the ground and is directed to a specific place to explode

strategic — adj. of or relating to a general plan that is created to achieve a goal in war, politics, etc., usually over a long period of time

significance — n. of or relating to a general plan that is created to achieve a goal in war, politics, etc., usually over a long period of time

warhead — n. the part of a missile that contains the explosive

sanction — n. an action that is taken or an order that is given to force a country to obey international laws by limiting or stopping trade with that country, by not allowing economic aid for that country, etc

range — n. a series of numbers that includes the highest and lowest possible amounts ; a specified distance

vivid — adj. seeming like real life because it is very clear, bright, or detailed