NASA to Return to Venus with Two New Missions

Update Required To play the media you will need to either update your browser to a recent version or update your Flash plugin.
By Bryan Lynn
06 June 2021

The missions will mark a return to U.S. exploration of Venus after many years. Two new robotic spacecraft are to be designed and built to study the planet with the highest temperatures in our solar system. 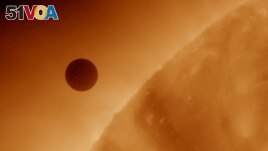 This handout image, courtesy of NASA, shows the planet Venus at the start of its transit of the Sun, June 5, 2012. (REUTERS/NASA/AIA/Solar Dynamics Observatory/Handout)

NASA chose American company Lockheed Martin to create and operate both spacecraft. The company will receive $500 million for each mission through NASA's Discovery Program. The spacecraft are expected to launch between 2028 and 2030.

One mission, called DAVINCI+, is designed to measure the planet's dense, cloudy atmosphere to understand how it formed and developed, a NASA statement said. It also aims to capture the first high-quality pictures of geological structures on Venus. Some are similar to ones on Earth.

After arriving at Venus, the DAVINCI+ spacecraft will send a probe into the planet's atmosphere. It will then use its instruments to measure levels of gases and other elements, temperature and pressure, Lockheed Martin said.

The other mission, VERITAS, will map the surface of Venus to learn about "the planet's geologic history and understand why it developed so differently than Earth," NASA said. When the VERITAS orbiter arrives at Venus, it will use a method called "aerobraking" to place itself "into an optimal science position in the planet's orbit," Lockheed Martin said. It will then use imaging equipment to capture data about the planet's geology.

Venus is Earth's closest planetary neighbor and the second closest planet to the sun. It is similar in structure to Earth, but a little smaller. Venus rotates in the opposite direction as Earth and most other planets. Also, its rotation is very slow.

The air on Venus is so dense and pressurized that it behaves more like a fluid than a gas near the surface. The planet has extremely high winds that push clouds completely around the planet every five days.

Such extreme conditions make it difficult for spacecraft to survive in Venus' atmosphere or on its surface. But scientists are very interested in learning more. Some believe Venus may have had ancient seas that could have made it habitable before unknown forces destroyed them.

"It is astounding how little we know about Venus," NASA scientist Tom Wagner said in a statement. He added that the new missions can provide fresh data on the planet's thick atmosphere, which is made up mostly of carbon dioxide. "It will be as if we have rediscovered the planet," Wagner said.

James Garvin is the chief scientist for NASA's Goddard Space Flight Center in Maryland. He said in a statement he considers Venus important to understanding "climate change, the evolution of habitability and what happens when a planet loses a long period of surface oceans."

The first spacecraft to explore Venus was NASA's Mariner 2 in 1962. It passed within about 34,000 kilometers of the planet. NASA says Mariner 2 successfully recorded the planet's temperature for the first time. It measured the Venus surface temperature to be about 465 degrees Celsius.

Bryan Lynn wrote this story for VOA Learning English, based on reports from NASA, The Associated Press, Reuters and Lockheed Martin. Mario Ritter, Jr. was the editor.

mission – adj. a flight by an aircraft or spacecraft to perform a specific task

geology – n. the study of rocks and soil and the physical structure of the Earth

probe – n. a vehicle used to examine or observe something closely

optimal – adj. the best of most effective possible in a particular situation

rotate – v. to turn or cause something to turn in a circle

astound – v. to surprise of shock someone very much

evolution – n. a gradual process of change and development