Update Required To play the media you will need to either update your browser to a recent version or update your Flash plugin.
By Dan Friedell
10 July 2021


Seventeen-year-old Charles Wilkinson will not go to college after completing his study at Edison High School last June. That does not mean Wilkinson will face an uncertain future. In fact, he is excited about his future.

About nine percent of high school graduates like Wilkinson in Fairfax County in northern Virginia do not go to either a four-year college or a community college. Some of them may have difficulty with traditional school subjects. But they are better at making things and using tools to solve problems.

Wilkinson told VOA he used to wonder what to do with his learning in math, science, and history. But that was before he started taking an auto body repair class at Edison Academy, his high school's center for career training.

At the academy, Wilkinson learned to fix dents and do basic welding – a process where one uses heat to melt pieces of metal and join them together. 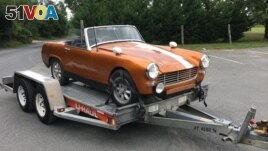 Charles Wilkinson purchased this Austin Healy Sprite for $600 to work on his auto repair skills.

With his training, Wilkinson got a job at a factory to make parts for machines. In his extra time, he rebuilt an old car that he bought for $600. It is an Austin Healy Sprite, a small convertible made in Great Britain about 50 years ago. Convertible is a term for a car that does not have a hardtop like most vehicles.

Other students learned to work on heating and cooling systems and take care of animals at the academy. Some studied how to solve computer security problems, cut hair, and build homes during their CTE, or career and technical education, classes.

Robert Stringham teaches CTE classes in heating and cooling at the academy. He said the current CTE students are better prepared for the future than those who went to high school in the 1990s.

In those days, Stringham said, some saw CTE classes as a "dumping ground" for students who had trouble with traditional school subjects. But now, he said, CTE students are able to learn even more skills.

"Because that's what it really is – technical. And things are becoming more to where it's not just about hands-on. ... You've got to problem-solve and you've got to think –‘creativity.'"

CTE classes can also be good for students whose families do not speak English at home. If they have trouble understanding a teacher speaking or reading a textbook, they can often learn a skill by watching.

In his class, Stringham said, students learned to work with computers and electrical parts that control heating and cooling systems. Other students worked on a home-building project during the 2020-2021 school year. And the house they built will be sold for close to $1 million.

Upon graduation, Stringham said, his students are prepared for a first-year job at a manufacturing plant or to train with an experienced electrician or woodworker.

Jacob Torres took heating and cooling classes with Stringham. The coronavirus pandemic reduced his in-person class time last year. So he worked on the heating system at his parents' home to keep learning.

Torres plans to continue learning about electrical systems and other subjects at Northern Virginia Community College. After two years, Torres will then decide whether to go to a four-year college or to work full-time.

Monica Bentley is the administrator at Edison Academy. She said students like Wilkinson and Torres often find a strong connection to school when they discover career training.

For example, Wilkinson was not able to use the school's equipment to work on his car because of limited in-person learning during the pandemic. As soon as the workspace re-opened in early 2021, he was there and worked until the very last second on the last day of school. "He can't get enough of this," Bentley said.

Wilkinson said it is a nice feeling to look at his Austin Healy after days of painting and repairing.

"Sometimes when I get discouraged, I can look at the car and be like, well, I figured this out myself. ... Even if it's not great, it's like, oh, well, I made that. That's pretty cool. It's a good feeling."

Dan Friedell wrote this story for Learning English. Hai Do was the editor.

What are some projects high school students work on where you live? Tell us in the Comments Section and visit 51VOA.COM.

graduate –n. a person who has earned a degree or diploma from a school, college, or university

academy –n. a school that provides training in special subjects or skills

dent –n. an area on a surface that is lower than the rest of the surface especially because of being hit or pushed in

dumping ground – idiom. a place where people or things that are not wanted are sent

textbook–n. a book about a particular subject that is used in the study of that subject especially in a school

discouraged- adj. the state of being frustrated or disappointed or the feeling of not wanting to do something