Update Required To play the media you will need to either update your browser to a recent version or update your Flash plugin.
By Anna Matteo
06 June 2021


Park rangers who watch North America's highest mountain say inexperienced and overconfident climbers are taking more risks and endangering themselves and other climbers. The rangers suggest many climbers are trying to move up the mountain too fast after having a year off because of the COVID-19 pandemic.

Denali in southern Alaska is 6,190 meters (20,310 feet) above sea level. So, climbing it requires a high level of skill. Climbers also need to acclimate to high altitudes that is not needed for most mountains in the U.S.

Acclimation to high altitudes means you slowly permit your body to adapt, or get used to conditions. If you don't, you could feel sick.

Experts at America's Cleveland Clinic say altitude sickness "happens when your body is unable to adapt to a low-pressure, low-oxygen environment..." This generally happens at about 2,400 meters (8,000 feet) above sea level.

The National Park Service recently issued a statement warning that many climbers in the Alaska Range are showing signs of inexperience and overconfidence.

After reporting no deaths in 2018 and 2019, at least two people have already died on the mountain in 2021. Two others were seriously injured, officials said.

The rangers issued their statement after a Canadian climber was seriously injured after falling nearly 305 meters (1,000 feet). He was not wearing climbing ropes. Other climbers reported the fall. People in a helicopter studying mountain ice in the area were able to rescue the man, park officials said. 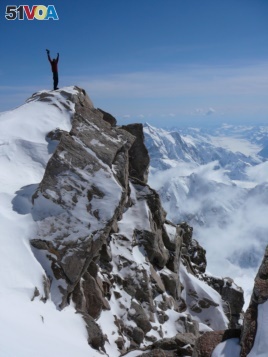 A mountaineer stands atop a tall peak in Denali National Park

"The remoteness and extreme weather in Alaska," the statement said, present extra risks. This is true even for climbers who are experienced at altitudes of about 4,000 meters.

The Park Service statement named several reasons for the increase in injuries and deaths. They include extreme tiredness, untested body reactions to high altitudes, quickly changing weather, and not bringing the right equipment.

In recent years, rangers said they have seen more climbers try to make Denali's summit by climbing the 2,134 meters (7,000 feet) from the final base camp to the top in one day. This is nearly impossible to do except for the most experienced climbers.

Experts suggest that climbers take 17 to 21 days to reach the top of Denali. That includes rest days and extra days to wait out extreme weather.

But rangers say many climbing groups experience something called "summit fever." This can happen when climbers are running out of days on their trip. So, they take greater risks.

Officials at Denali describe how summit fever may lead to bad decision-making. People often climb the mountain in a group and move up the mountain slowly by reaching several base camps. This helps the climbers acclimate to the increase in altitude.

But some people leave their starting group after reaching the final base camp (at about 4,200 meters). They do this because other group members may decide not to climb the summit.

Some climbers then join other groups or individuals they don't know well. And that can lead to problems. Sometimes those people get too sick to keep going. They sometimes must share sleeping structures, water, and fuel.

The statement said that "a number of climbing teams have had their own summit..." attempts ruined by the need to care for climbers who have difficulties.

The statement also reminded climbers that the National Park Service rescues people only when their lives, arms and legs, or eyesight are at risk. It said the Park Service has already had to turn down rescue requests this year because they did not meet those conditions.

The Park Service limits the number of people who can climb Denali to less than 1,500 per year. In 2019, 726 people made it to the summit.

The busiest time for climbing Denali is during May and June. Cold weather is a problem in the spring, and storms become more common during the summer.

Jeffery Collins reported this for the Associated Press. Anna Matteo adapted it for Learning English. Bryan Lynn was the editor.

park ranger – n. a person in charge of managing and protecting part of a national park

overconfident – adj. feeling too sure about something

acclimate – v. to adapt (someone) to a new temperature, altitude, climate, environment, or situation

adapt – v. to adapt (someone) to a new temperature, altitude, climate, environment, or situation

remoteness – n. the state of being far away from other people, houses, cities, etc.

base camp – n. a camp from which mountaineering expeditions set out