Update Required To play the media you will need to either update your browser to a recent version or update your Flash plugin.
By Bryan Lynn
14 September 2021


Russia's government says President Vladimir Putin is in self-isolation after several members of his team became infected with COVID-19.

Government spokesman Dmitry Peskov told reporters Tuesday that Putin himself tested negative for COVID-19 and was "absolutely healthy." But the Russian leader decided to self-isolate because he had been in close contact in recent days with others who were infected.

Peskov did not say how long Putin would remain in self-isolation. He did not name any of the individuals around the president who were infected, but he did say there were several cases. 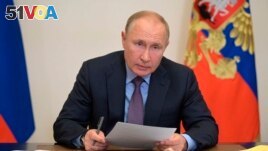 Russian President Vladimir Putin attends a meeting with members of the Russian government and heads of the United Russia party via videoconference at the Novo-Ogaryovo residence outside Moscow, Russia, Sept. 14, 2021. (Alexei Druzhinin, Sputnik, Kremlin Pool Photo via AP)

Peskov added that Putin's isolation would not greatly affect his work. He said that while Putin will not hold in-person meetings, the president "will continue his activity via video conferences."

The 68-year-old Putin has had two injections of Russia's Sputnik V vaccine. The president explained the situation at a government meeting by video conference. "It's a natural experiment. Let's see how Sputnik V works in practice," Putin said. "I have quite high levels of antibodies. Let's see how that plays out in real life. I hope everything will be as it should be."

Putin said the situation forced him to cancel a planned trip to Tajikistan this week for security meetings expected to center on Afghanistan. He added that he planned to take part in those meetings by video conference instead.

The Russian government said Putin decided to self-isolate after completing a series of meetings in Moscow on Monday. Those included face-to-face talks with Syrian President Bashar al-Assad. Putin also met with Russian Paralympians and traveled to western Russia on Monday to observe joint military drills with Belarus.

When asked about the timing of the decision, Peskov said it was made after "doctors completed their testing, their procedures." He added that "no one's health was endangered" during Monday's events.

Alexander Gintsburg directs the Gamaleya Institute, which developed the country's Sputnik V vaccine. He told the Interfax news agency that, in his opinion, Putin would need to self-isolate for at least one week.

Russian officials have been criticized for not taking the pandemic seriously and for rarely putting in place measures to control the virus, even when faced with high infection rates. Russia's death rate from COVID-19 is currently at its highest level since the pandemic began. However, few virus restrictions are currently in place.

The Associated Press and Reuters reported on this story. Bryan Lynn adapted the reports for VOA Learning English. Ashley Thompson was the editor.

isolate – v. to put or keep (someone or something) in a place or situation that is separate from others

negative – adj. in a medical test, negative means the person being tested does not have a disease

in practice – n. used to say what is actually done or what the actual effect or result of something is

procedure – n. the official or usual way of doing something