Separated at Border, Family Is Building New Life Together

Update Required To play the media you will need to either update your browser to a recent version or update your Flash plugin.
By Jill Robbins
30 May 2021


Honduran immigrant Keldy Mabel Gonzales Brebe entered the United States legally this month to join her children in Philadelphia, Pennsylvania. She had not seen them since 2017 when U.S. border officials separated the family under policy of the former administration of President Donald Trump.

Keldy missed celebrating birthdays and holidays together. Her teenagers filled out and grew facial hair.

"There were times I thought I would never see them again," she said.

Keldy fled Honduras with her sons after drug traffickers threatened their lives. She asked for asylum at the U.S. border. Instead, U.S. officials separated her from her children, put her in jail and then sent her back to Honduras. These actions were part of President Trump's policy to arrest all adults entering the country illegally.

Her sons were detained temporarily and then permitted to go to live in Philadelphia with relatives. 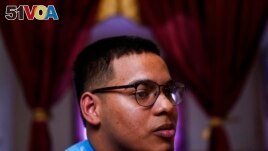 Mino Zuniga Gonzales, 19, speaks during an interview with The Associated Press in the Kensington section of Philadelphia, Sunday, May 16, 2021.

Keldy's immigration story began on the north Caribbean shore of Honduras, a tourist area. Her husband was a guide, taking visitors on rainforest, wetlands, and river tours. She described herself as a middle-class housewife who prepared meals for the tourists who employed her husband's services.

Criminal drug-trafficking groups controlled territory in the area. They demanded money of businesses and individuals in exchange for protection. The punishment for failing to pay was murder.

Assassins killed four of Keldy's brothers and sisters. After she spoke against the killers during a trial in 2011, she received many death threats. There was a price on her head, she was told.

The whole family fled to Mexico in 2013 but the Mexican government returned them to Honduras immediately.

Back in Honduras, they sought safety and secrecy in a rural mountain area. Her husband left for the U.S. again, this time reaching the state of Texas. Then, in 2017, neighbors warned Keldy that people were asking worrisome questions about her. So, she fled the country again with her sons.

Keldy stopped a Border Patrol car to ask for asylum. The officials took her and her sons together to a detention center in Deming, New Mexico, 35 miles north of the border. They put restraints on her and separated her from the boys.

Soon, the officials released the boys and family members paid for their flight to Philadelphia. Their older brother, Alex, now 21, became legally responsible for his brothers and cared for them while they went to school. He worked in the building industry.

But Keldy was kept in an Immigration and Customs Enforcement detention center in El Paso, Texas, for a year and a half. Officials sent her to Honduras in January 2019.

She returned to Mexico, waiting for a chance to enter the United States. Her family sent her money to live on. She video messaged with her boys. The memories of their graduations and other big moments during that time are painful because she could not be with them.

Finally, last month, Linda Corchado, director of legal services at the non-profit Las Americas Immigrant Advocacy Center, contacted her. Officials in the Biden administration were working to reunite families separated at the border. She told Keldy to get passport photos.

Keldy entered Texas on May 4 in a car with Corchado. Then she flew to Philadelphia.

A video shows the family reunion on May 4 in the Philadelphia home of a relative. Keldy cried while her children hugged her. "Hola mi amor, amor mío ("Hello my love, my love")," she said, her face buried in the arms of her sons.

Keldy is thankful to be with her family, free from death threats in Honduras and the pain of separation.

But there are many difficulties. Keldy's son, Mino, left school to help pay the rent on the house that six of them share. She wants to get a job but is caring for her seven-year-old niece who has special needs and her 75-year-old mother. She also cooks and cleans for the family. Keldy says she sees drug use and hears gun shots in their Philadelphia neighborhood.

She is happy, now, to be with her children. She knows that it is more than many of her fellow migrants have.

"Every day I pray to God for other mothers to be able to come in. They cry for their kids," she said. "They ask me 'do you know anything new?' and I tell them to have patience. And I tell them they will succeed."

Claudia Torrens wrote this story for the Associated Press. Jill Robbins adapted it for Learning English. Caty Weaver was the editor.

tourist – n. a person who travels to a place for pleasure

middle class – n. the social class that is between the upper class and the lower class and that includes mainly business and professional people, government officials, and skilled workers

assassin – n. a person who kills someone (such as a famous or important person) usually for political reasons or for money

hug – n. to put your arms around someone especially as a way of showing love or friendship

niece – n. daughter of your brother or sister

What do you think of the practice of separating immigrant families? Does it happen where you live? We want to hear from you. Write to us in the Comments Section