Update Required To play the media you will need to either update your browser to a recent version or update your Flash plugin.
By Ashley Thompson
16 September 2021 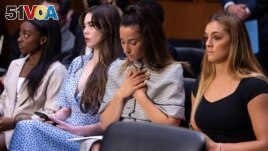 The gymnasts provided lawmakers with forceful and emotional testimony. They described how the abuse continues to affect them. They also described how inaction and possibly illegal behavior by the Federal Bureau of Investigation, or FBI, has affected their ability to heal.

Biles spoke to lawmakers on the Senate Judiciary Committee. She said that FBI agents and American gymnastics officials "turned a blind eye" to Nassar's abuse of her and hundreds of other women.

The hearing is part of the committee's effort to understand why the FBI delayed and made mistakes in investigating Nassar. The delays let Nassar abuse other young girls and women. He is now in prison.

All four witnesses said they knew of victims who were abused by Nassar after the FBI was told of allegations against him in 2015.

Maroney won a gold medal with the 2012 Olympic team. She spoke by telephone with FBI agents in July of 2015. She described to agents in detail how Nassar abused her for years, beginning when she was 13 years old. She said when she described those terrible memories, there was "dead silence" from the agents. She also said the FBI did not officially document her report of child sex abuse until more than a year later.

Maroney said the FBI "minimized and disregarded" her and the other gymnasts as they delayed the investigation.

"I think for so long all of us questioned, just because someone else wasn't fully validating us, that we doubted what happened to us," Maroney said. "And I think that makes the healing process take longer."

FBI Director Christopher Wray also spoke at the hearing. He said he was "deeply" sorry for delays in the Nassar investigation and the pain it caused.

An investigation by the Justice Department released this summer said the FBI made serious mistakes. It found that the agency did not treat the case with "seriousness" after USA Gymnastics first reported the allegations to the FBI's field office in Indianapolis in 2015.

Wray criticized his own agents. He made a promise to the victims that he would make sure "everybody at the FBI remembers what happened here" and that it never happens again.

Wray said the FBI had dismissed a supervisory agent who had failed to correctly investigate the Nassar case and later lied about it.

Biles and Maroney were joined by Aly Raisman, who won gold medals with them on the 2012 and 2016 Olympic teams. Also joining them was world champion Maggie Nichols. Raisman told the senators that it sickens her that she and other victims are still looking for answers six years after the first allegations against Nassar were reported.

Speaking after the hearing, Raisman called for more investigations of USA Gymnastics, Olympic officials and the FBI. The probes should be independent and go back many years, she said.

She said she wanted to be in Tokyo "to help maintain a connection" between the failures of high-level sports officials and the Olympic competition. But that position, she said, proved to be a very "difficult burden for me to carry."

Senate Judiciary Committee Chairman Richard Durbin said it was some of the most powerful and heartbreaking testimony he had ever heard.

He said he and other lawmakers "have a job to do, and we know it."

Mary Clare Joalonick, Will Graves and Michael Balsamo reported this story for the Associate Press. Ashley Thompson adapted it for VOA Learning English. Mario Ritter, Jr. was the editor.

gymnast – n. a person who performs various physical exercises on a mat or on special equipment as part of an athletic competition

testimony –n. something that someone says especially in a court of law while formally promising to tell the truth

allegation –n. a statement saying that someone has done something wrong or illegal; an accusation

minimize –v. to make (something bad or not wanted) as small as possible

validating –adj. to show that someone's feelings or opinions are fair and reasonable

trauma –n. a very difficult or unpleasant experience that causes someone to have mental or emotional problems usually for a long time

burden –n. something that is difficult to accept, do or deal with