Update Required To play the media you will need to either update your browser to a recent version or update your Flash plugin.
By Gregory Stachel
31 May 2021


Samuel Anyaele is teaching young Nigerians computer skills using their smartphones. The goal is to give them the ability to find a job anywhere in the world

Anyaele often tells his students that everything they need to write software code can be found on their cellphones.

He writes code for websites on his phone. He then shows the code to his students in a small classroom in Lagos, Nigeria. His students can look up at a big screen and down at the smaller one in their hands. 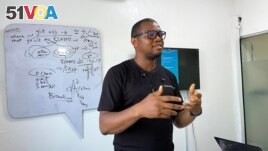 Anyaele runs three-month courses to teach these skills. He said that they are giving students a tool to use even if they do not have a personal computer.

Coding skills are seen by many young Nigerians as a way to earn money from employers anywhere in the world. Jobs are difficult to find in Nigeria. The country has 200 million people and two-thirds of Nigerians aged 15 to 34 are either unemployed or do not have enough work.

Anyaele provides free classes to beginners while classes meant for professionals cost $210. He works for one of many companies in Lagos that offer to teach people who want to become software developers.

Joseph Agunbiade is the founder of Univelcity which also provides training. He said, "if you don't find jobs locally, there are international jobs."

Last year, the American company Stripe bought the Nigerian financial technology company Paystack for $200 million. And Flutterwave, a private company with operations in Africa, was valued at $1 billion.

Chinonso Okafor is 20 years old and one of Anyaele's students. He is now building websites for employers. He said using his phone means he can continue working after his computer runs down when there is a power outage.

Anyaele said some people struggle to see phones as anything more than a device to use for fun. He identified that idea as a mental block that many fail to overcome.

He said, "They're assuming it's something childish, or something that isn't professional."

code – n. a set of instructions for a computer

course –n. a series of classes in a subject

assume – v. to think that something is true or probably true without knowing that it is true