Update Required To play the media you will need to either update your browser to a recent version or update your Flash plugin.
By Dan Novak
24 May 2021


Young people in Britain do not think the country should keep the monarchy, a new survey shows. They now favor an elected head of state.

In the survey by YouGov, 41 percent of those aged 18 to 24 thought there should be an elected head of state. Thirty-one percent said they wanted a king or queen.

That is a reversal from just two years ago, when 46 percent favored the monarchy and 26 percent wanted it gone.

The current British monarchy dates back to William the Conqueror, who invaded England in 1066. For centuries before that, however, royal families ruled many kingdoms across England, Scotland and Wales.

Among all British people, the survey had better news for Queen Elizabeth and the royal family. Overall, 61 percent supported the monarchy, while 24 percent thought there should be an elected head of state. 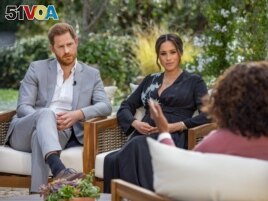 The last few months have been especially difficult for the royal family. In April, Elizabeth's husband Prince Philip died at age 99. And in March, there was the interview by the queen's grandson Prince Harry and his wife Meghan with television star Oprah Winfrey. In the widely watched interview, the couple said the royal family did not provide them with emotional or financial support and were asked by family members about the skin color of their unborn child. The two officially left the monarchy in early 2020.

The monarchy is not likely to end as long as Queen Elizabeth remains head of the royal family. But, there is concern among the royals about decreasing support among younger Britons.

Past surveys have shown that younger generations also hold more favorable feelings toward Harry and Meghan.

Michael Holden reported this story for Reuters. Dan Novak adapted it for VOA Learning English. Bryan Lynn was the editor.

monarchy — n. a country that is ruled by a monarch (such as a king or queen)

survey — n. an examination of people's opinions or behavior made by asking people questions

reverse — v. to change (something) to an opposite state or condition

couple — v. two people who are married or who have a romantic or sexual relationship