Update Required To play the media you will need to either update your browser to a recent version or update your Flash plugin.
By Bryan Lynn
23 July 2021


After a one-year delay, the Tokyo Olympics officially began Friday. The Games began with the opening ceremony, which looked different than usual because of COVID-19 restrictions.

Fewer than 1,000 people were permitted to attend the ceremony, which included the traditional flame lighting, parade of competitors and musical performances. The opening also included fireworks in blue and white, the colors of the official Tokyo 2020 emblem.

Olympic organizers sent the traditional message of peace as music stars sang John Lennon and Yoko Ono's famous song Imagine. As the song played, more than 1,800 drones formed the shape of the Olympic sign in the sky before changing into the shape of the world. 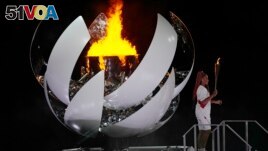 Naomi Osaka stands beside the Olympic flame after lighting it during the opening ceremony in the Olympic Stadium at the 2020 Summer Olympics, Friday, July 23, 2021, in Tokyo, Japan. (AP Photo/David J. Phillip)

In his opening speech, Bach called the day "a moment of hope." "Yes, it is very different from what all of us imagined. But finally we are all here together," Bach added. "You struggled. You persevered. You never gave up. Today you are making your Olympic dreams come true."

Seiko Hashimoto, President of the Tokyo 2020 organizing committee, recognized the efforts of health workers in her comments. "With the world in a tough situation because of the coronavirus pandemic, I would like to pay my respect and express my gratitude to medical workers and all those who are working hard every day to overcome the difficulties," she said.

Japanese tennis star Naomi Osaka received the Olympic flame from a torch walk through the ceremony area. She lit the Olympic cauldron, officially opening the Games.

A small number of athletes marched in the parade because of restrictions aimed at preventing virus infections.

Not all the athletes took pandemic measures seriously. Team members from Kyrgyzstan, Tajikistan and Pakistan paraded without masks even as most other athletes at the ceremony observed the restriction.

There has been widespread public opposition to holding the Olympics in Japan. Many health experts also urged officials to cancel the Games as Japan struggled in recent months to contain the spread of COVID-19. On Friday, hundreds of people protested outside the ceremony, shouting "Stop the Olympics."

Earlier this week, Japanese Prime Minister Yoshihide Suga told IOC members that his country was committed to holding a safe and successful Games. He said the government had also taken measures necessary to protect "the health and security of the Japanese public."

Only one-third of the Japanese public has had even one injection of COVID-19 vaccine. The low vaccination rates added to fears that the Games could become a super-spreader event. More than 100 people involved with the Olympics have already tested positive for the virus.

A moment of silence was held "for all those family and friends we have lost," especially to COVID-19.

The Olympic oath, repeated by the athletes at the end of the parade, was changed for the Tokyo Games. This year, the athletes promised their commitment to inclusion, equality, and non-discrimination for the first time in Olympics history.

The Associated Press, Reuters and VOA News reported on this story. Bryan Lynn adapted the reports for VOA Learning English. Ashley Thompson was the editor.

emblem – n. a picture, object of symbol used to represent a person, group or idea

mask – n. a covering for the face or part of the face: especially related to preventing the spread of disease

persevere – v. to continue to try to do something even though it is difficult

torch – n. a long stick with material that burns at the top

cauldron – n. a container that holds the traditional Olympic flame

athlete – n. someone who competes in sports with others

gratitude – n. the feeling or quality of being thankful

positive – adj. in a medical test, positive means the person being tested has a disease or condition

oath – n. a formal and serious promise to tell the truth or to do something

commitment – n. a promise or strong decision to do something