What Is Critical Race Theory?

Update Required To play the media you will need to either update your browser to a recent version or update your Flash plugin.
By Dan Novak
06 July 2021


Over the past few months in the United States, the expression "critical race theory," or CRT, has appeared in statehouses and political gatherings from almost nowhere.

CRT has become an important cause for conservatives. Many Republican-controlled states have passed legislation restricting how history and race can be taught in public schools.

For some, critical race theory is a way of understanding how race has shaped American society and public policy. For others, CRT creates division and conflict between white people and minorities.

But even those who criticize critical race theory have a hard time defining what it is. So, what exactly is it?

What is critical race theory?

Critical race theory is a way of thinking about America's history through race. It argues that racism is more than just individual prejudices and discrimination.

The creators of the theory argue that the U.S. was founded on stolen land and labor, through the colonization of native land and slavery. Supporters of the theory also believe race is not biological, but culturally invented.

Kimberlé Crenshaw is the head of the African American Policy Forum and one of the earliest supporters of CRT. At first the theory was "simply about telling a more complete story of who we are." 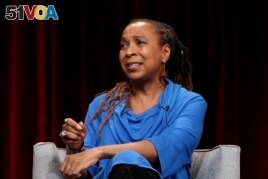 In this Feb. 2, 2019, file photo, Kimberle Crenshaw participates in the 'Reconstruction: America After Civil War' panel during the PBS presentation at the Television Critics Association Winter Press Tour at The Langham Huntington in Pasadena, Calif.

Is critical race theory being taught In schools?

There is little evidence that critical race theory is being taught to public school students. But some ideas relating to the theory are being taught.

Tassie Zahner is an Advanced Placement, or AP, American history teacher in Montgomery County, Maryland. AP is a nationwide program that provides high school students with college-level classes. She said it would be very hard to teach her class without using some CRT concepts, like America's history of racism.

"In order to teach an AP U.S. history class correctly you have to talk about those things," she said. "You can't prepare students ... if you're not teaching the truth about U.S. history."

But some parents and conservative lawmakers see some uses of the theory as problematic.

In Greenwich, Connecticut, some middle school students were given a "white bias" survey, which angered some parents. The Wake County Public School System in North Carolina organized a meeting for teachers on critical race theory, angering state Republican lawmakers.

Lisa Luten is a spokeswoman for the Wake County school system. North Carolina is one of the 26 states that have proposed laws that restrict critical race theory or limit how teachers can discuss racism or sexism, says the publication Education Week.

"Critical race theory is not something we teach to students," Luten said. "It's more of a theory in academia about race that adults use to discuss ... their environment."

Why are Republicans upset?

Many conservatives and Republicans say CRT is an effort to rewrite American history. They argue CRT tells white people that they are naturally racist and should feel guilty because of their privileges.

But the term "critical race theory" has recently been used as a general description for racial ideas that conservatives dislike. These include white privilege, systemic inequality and inherent bias.

How are states addressing it?

Out of the 26 states that have considered legislation, eight have banned or limited the teaching of CRT and similar ideas. The bans, all from Republican-led states, largely describe what can be taught inside the classroom. While legislation in some states mentions critical race theory by name, others do not. Many are unclear about what should or should not be taught.

Other states have banned teaching The New York Times' The 1619 Project. Released in 2019, The 1619 Project aimed to tell a story of American history with slavery at the center of the country's founding.

The banning of CRT ideas has extended to other countries as well. In late June, Australia's senate voted to remove CRT from the national school system. The Conversation reported that some politicians and media groups were concerned that Australia's schools were teaching too much about the "oppression, discrimination and struggles of Indigenous Australians."

What is the response to the Republican actions?

Teachers' groups, educators and social studies organizations worry the laws will make students get an untrue picture of American history. They say it is very damaging for students to think that racism, discrimination and past injustices do not affect the country today.

Education Week argues it will be difficult to enforce laws that place limits on what happens inside individual classrooms. But some educators fear that the laws could scare teachers into changing what and how they teach about race.

Zahner said lawmakers and adults pass these kinds of laws because they "underestimate the ability of young people to think critically." She said students do not need to depend on the analysis of historians and social scientists to get an understanding. Often, they can read documents or other information from the past and learn for themselves.

Zahner added that refusing to permit children to study CRT means "you're taking away both the knowledge and their ability to analyze things."

prejudice — n. an unfair feeling of dislike for a person or group because of race, sex, religion, etc.

academia — n. the life, community, or world of teachers, schools, and education

bias – n. a tendency to believe that some people, ideas, etc., are better than others that usually results in treating some people unfairly

survey — n. an activity in which many people are asked a question or a series of questions in order to gather information about what most people do or think about something

privilege — n. a right or benefit that is given to some people and not to others

inherent — adj. belonging to the basic nature of someone or something

indigenous –adj. produced, living, or existing naturally in a particular region or environment

underestimate – v. to think of (someone or something) as being lower in ability, influence, or value than that person or thing actually is