Will Americans Return to Church after Pandemic

Update Required To play the media you will need to either update your browser to a recent version or update your Flash plugin.
By Dan Novak
03 July 2021


Millions of people stayed home from churches and other places of worship during the coronavirus pandemic. Struggling congregations have one important question: How many people will return?

The pandemic has eased in the United States and in-person services have started up again. Many places of worship, however, fear a loss of congregants.

Some houses of worship may not survive.

The Rev. Gloria E. White-Hammond is a professor at the Harvard Divinity School and the leader of a church in Boston. She said smaller churches with older congregations are in the greatest danger of failing.

For the 164-year-old Waldoboro United Methodist Church in Maine, the pandemic proved fatal to the church. Even before COVID-19, weekly attendance had fallen to 25 or 30 for a church that holds several hundred people. The number further fell to five or six before the final service was held Sunday, said the Rev. Gregory Foster.

"We can't entirely blame everything on COVID. But that was just the final blow. Some people have not been back at all," Foster said.

In Virginia, the Mount Clifton United Methodist Church experienced something similar. The church can seat more than 100 people, but the number of weekly worshippers fell around 13, even before the pandemic.

It "became next to impossible to sustain," she said. 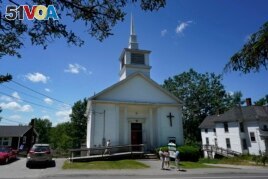 The pandemic came at a time when fewer and fewer people in the U.S. identify as religious. And it is too early to know the full impact of the pandemic. A survey by The Associated Press and the National Opinion Research Center shows signs of hope as well as cause for concern.

They found that about 75 percent of Americans who attended religious services in person at least monthly before the pandemic say they are likely to do so again. That's up a bit from the 66 percent of people who said in May 2020 that they would attend services if it were possible. But seven percent also said they will not be attending.

Those findings are in line with a Pew Research Center survey of Americans last summer. Pew found that 92 percent of people who regularly attend religious services expected to continue at the same or higher rate. Seven percent said they will attend in-person services less often.

White-Hammond said congregations that are successful after the pandemic will likely be the ones that changed to meet the needs of the pandemic. She said those that kept a connection with congregants have a better chance at surviving. Pew found that eight in 10 congregants said services were being streamed online.

In Charlotte, North Carolina, Temple Beth El was closed during the pandemic. But the temple kept a connection with congregants through events like "challah day." Volunteers baked over 900 loaves of challah bread, which were delivered to homes so people could eat them on Shabbat, Judaism's day of rest.

Dusty Klass is the rabbi of Temple Beth El.

"There were people who went home and may never come back to the sanctuary," he said, adding "it's up to us to make sure they have the opportunity."

David Sharp reported this story for The Associated Press. Dan Novak adapted it for VOA Learning English. Susan Shand was the editor.

worship — v. to show respect and love for God or for a god especially by praying, having religious services, etc.

congregation — n. the people who are attending a religious service

blow — v. to damage or destroy (something) with an explosion

sustain — v. to provide what is needed for (something or someone) to exist, continue, etc.

survey — n. an activity in which many people are asked a question or a series of questions in order to gather information about what most people do or think about something

rabbi — n. a person who is trained to make decisions about what is lawful in Judaism, to perform Jewish ceremonies, or to lead a Jewish congregation

sanctuary – n. the room inside a church, synagogue, etc., where religious services are held

opportunity – n. an amount of time or a situation in which something can be done